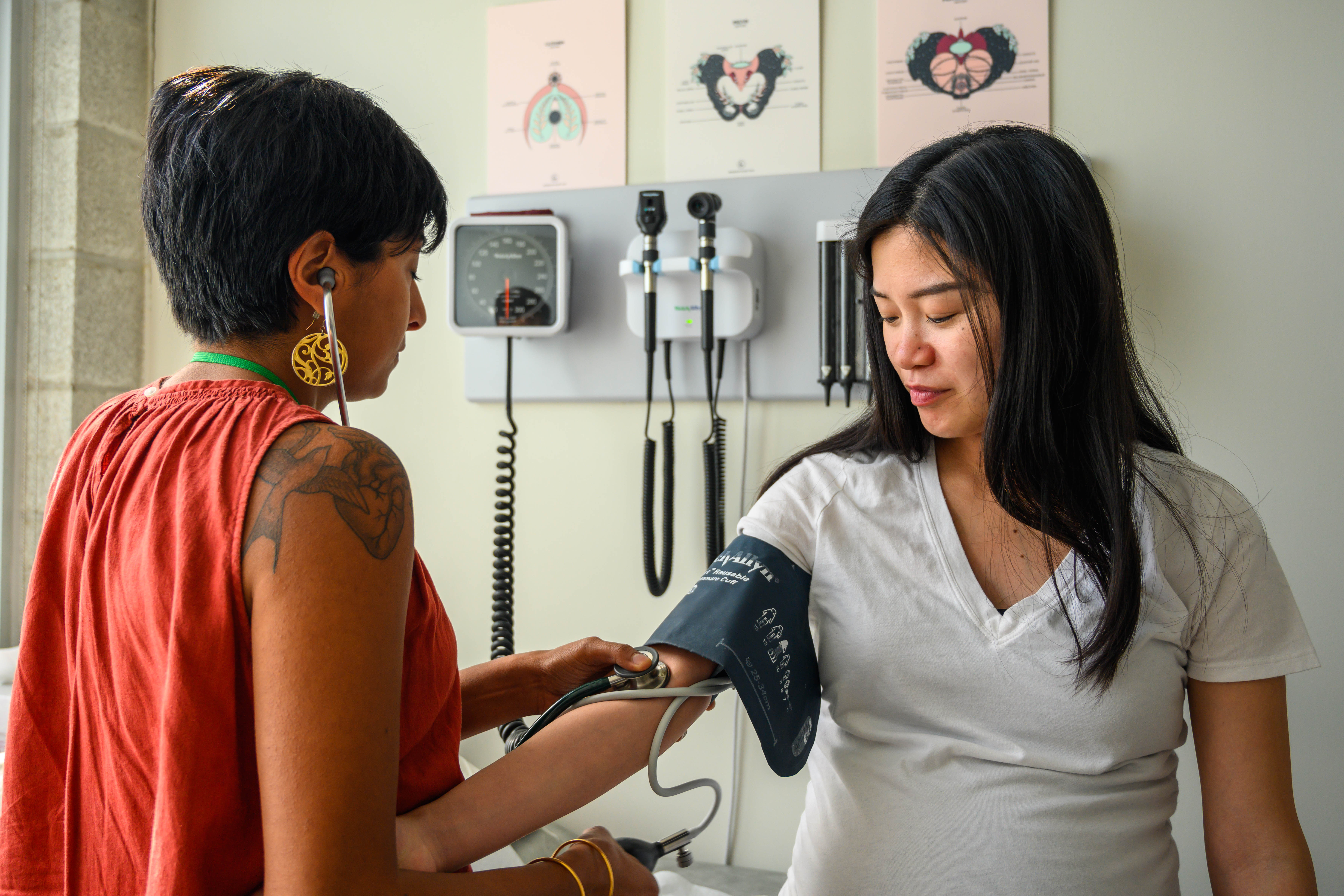 “Midwives should be looking after all the pregnancies people have”: The role of a midwife in providing and advocating for abortion care

Since the dawn of time, midwives have been at the forefront of individual and social change, providing care (including abortion care) and support to adolescent girls, women, and birthing people at every stage of their lives, including their decisions about whether to have children and, if so, how many. It is no surprise then, that midwives are leading movements in their communities to improve access to safe abortion and other sexual and reporductive health services.

As news broke of the Supreme Court of the United States’ decision to dismantle Roe Vs. Wade, rolling back 50 years of access to abortion, American midwives and their counterparts around the world took to the streets and to social media to express their outrage at what this decision will mean for women’s rights and dignity — especially those living in poverty, those with marginalised racial and ethnic identities, adolescents, and those living in rural areas. The U.S. joins just a handful of countries that have reduced access to abortion care in recent years — a move that ignores womens fundamental right to bodily autonomy and fails to take into account the overwhelming global medical evidence that abortion is healthcare.

So, where do we go from here? And what is the role of a midwife in upholding and providing safe abortion care?

Realising that authorised and well-educated midwives can perform competent and safe abortion-related services, many governments have modified their laws and policies to empower midwives to perform comprehensive abortion services. In fact, the International Confederation of Midwives (ICM) — the global body representing midwives and their associations and establishing education and regulation standards for the profession — notes that midwives meeting the Essential Competencies for Midwifery Practice have the knowledge of and training in various methods used to terminate pregnancies. They are often involved in providing these services as part of treating miscarriages, ectopic pregnancies, and other routine prenatal events.

Despite their training, most midwives in most countries, are not autonomously performing abortions. Midwives and their associations are pushing to change this, arguing that the role of midwives within primary health systems as advocates and providers of reproductive health services, makes them uniquely positioned to uphold and deliver abortion care.

Shezeen Suleman is a midwife in Ontario, Canada. She works as part of the MATCH (Midwifery and Toronto Community Health) programme — a small team of midwives and a social worker, who work alongside other health care providers within the South Riverdale Community Health Centre. MATCH offers a wide variety of services related to pregnancy, labour, and birth. In 2018, one year after the medical abortion pill first became legal in Canada, Shezeen and three of her midwife colleagues attended the National Abortion Federation (NAF) of Canada’s annual general meeting and its learning session on providing medical abortions.

“In one day, we learned the basics of how to provide medication abortion care, the clinic flows, the tests to run, and how to follow-up.” says Shezeen.

Mifegymiso, is the Canadian brand name for the combination of drugs used to induce abortion, and as Shezeen explains, midwives routinely use one of these drugs — misoprostol — to manage postpartum hemorrhage. Despite this, midwives in Ontario are unable to prescribe Mifegymiso, so Shezeen and her midwife collegaues developed  a unique model of care that would allow a midwife to facilitate medical abortions with support from physicians at their clinic.

“As part of providing medication abortion care, blood work and ultrasound can be done, says Shezeen. “As midwives, we routinely draw blood and easily incorporate this into our practice. Our team then took ultrasound training and acquired an ultrasound machine. We can now date people's pregnancies and rule out ectopic pregnancy, all in on stop for our clients seeking this care. Our physician and nurse practitioner colleagues then come in and prescribe mifegymiso to our clients.”

Shezeen says this approach to providing medical abortions is in line with the midwifery model of care — one that places women and other birthing people at the centre of their own health decision-making: “Midwives are excellent counselors and we’re really excellent at sitting with people and seeing where they're at and taking it slow — we book a full hour for these appointments. And when they take misoprostol we call them and we do basically a labour support phone call, which midwives know how to do; we know how to counsel people through bleeding and cramping and we provide them with the medications to manage the pain.”

Through NAF, Shezeen now provides medical abortion training to other midwives, with the recognition that they won’t be able to deliver this care until their drug list is expanded. The hope is that if and when the Ontario College of Midwives — and other like-minded regulatory bodies across Canada — expand the scope of midwifery practice to include abortion — many midwives will already have the training to provide this care.

“There does seem to be a groundswell of interest for midwives from across the country who want to do abortion work,” says Shezeen. “Midwives should be looking after all of the pregnancies people have, including the ones that they lose, and the ones that they don't want to keep.

The United States - Ensuring abortion stays on the midwifery agenda

South of the border, in the United States, access to abortion looks entirely different; yet midwives there are involved in similar abortion advocacy work.

In 2020, Katrina Lipinsky graduated from the University of Pennsylvania with a master’s degree in nursing and midwifery. Throughout her studies, she was involved with Nurses for Sexual and Reproductive Health — an organisation supporting in-service and student midwives and nurses to become skilled sexual and reproductive health providers and advocates. A significant portion of Katrina’s advocacy has focused on expanding and improving the training midwives receive.

“There are students across the country who are organising on their campuses trying to push school administrations to integrate abortion into the curriculum,” says Katrina.

Katrina notes that midwives in Pennsylvania and select states throughout the U.S., are performing procedures like vacuum aspirations for miscarriages and blood clots, but because these procedures can also be used to terminate an unwanted pregnancy, many midwifery programmes don’t provide this training, even in States where abortion is legal.

“It's a procedure that has other uses, beyond abortion that are legal, that are within our scope of practice that just aren't being taught because they're controversial,” says Katrina. In the wake of the SCOTUS decision to overturn Roe Vs. Wade, Katrina sees equipping midwives with abortion training as fundamental to increasing the number of abortion providers in states where the procedure remains legal.

In addition to advocating at the campus level for changes to midwifery and nursing curriculums, Katrina is also involved in work with NAF to educate physicians on the value of midwives providing abortions. “Our physician colleagues need to understand and support us in doing abortion work, they need to see our value,” she says, pointing to a few examples across the country where midwives and doctors are co-running clinics that provide abortion services. “This model leads to more training opportunities [for midwives] and therefore more opportunities for midwives to be providing care to their own patient populations instead of referring them out. And then [patients] don't have to walk through protesters, they're just going into their midwifery office.”

With the dismantling of Roe Vs. Wade, access to sexual and reproductive health services in the U.S. has been under a microscope, but midwives around the world are concerned about how this decision will impact care in their own countries, especially in middle- and low-income countries.

Neha Mankani is a midwife in Pakistan and the Southeast Asia regional coordinator for the PUSH Campaign. She has witnessed the impact of the Global Gag Rule on reproductive rights in her own country and fears the overturning of Roe Vs. Wade will have similar consequences on women’s access to health service globally.

“There is the fear that if this ruling comes with conditionalities around usage of foreign funds for safe abortion and reproductive rights it will be a big step backwards for the SRHR movement,” says Neha. “Many of the free reproductive health clinics in Pakistan and other developing countries where people can access safe abortion and post-abortion care are also operational through donor funding which, it is expected, will also shrink with changes in the global movement around abortion.”

Health organisations are echoing Neha’s concerns with statements from MSI Reproductive Choices and other like-minded advocacy groups pointing to the role this decision will likely play in emboldening anti-choice movements around the world. In her daily practice, Neha says she sees how these attitudes influence the care midwives are willing to provide. “The negative attitudes around abortion often make midwives steer clear of openly advocating for it,” says Neha.

Throughout her career, Neha has worked to advocate for clear legal guidelines on what midwives can and cannot do as it pertains to providing abortion care in Pakistan. As it stands, she says there are many barriers to midwives being able to provide this care.

“There is ambiguity around the legality of induced abortion and terminations in the country, and though the guidelines are flexible, a lot of times it’s merged with negative attitudes and religious beliefs and the training facilities that midwives have been trained at have given them mixed messaging on what they are and are not allowed to do.”

Neha recently authored a blog post on how restrictive abortion policies play into what she sees as the ‘communal ownership of women’s bodies’ in action.

“One of the most important things that I do in my work as a midwife is working with girls and women to help them learn how to make decisions about their own bodies,” says Neha. “As community-based healthcare workers, I’ve seen the ways that teams of midwives connect with clients and their families and work around advocating for people to make their own decisions.”

Learn more about the role of midwives in providing and advocating for abortion services through the resources below: